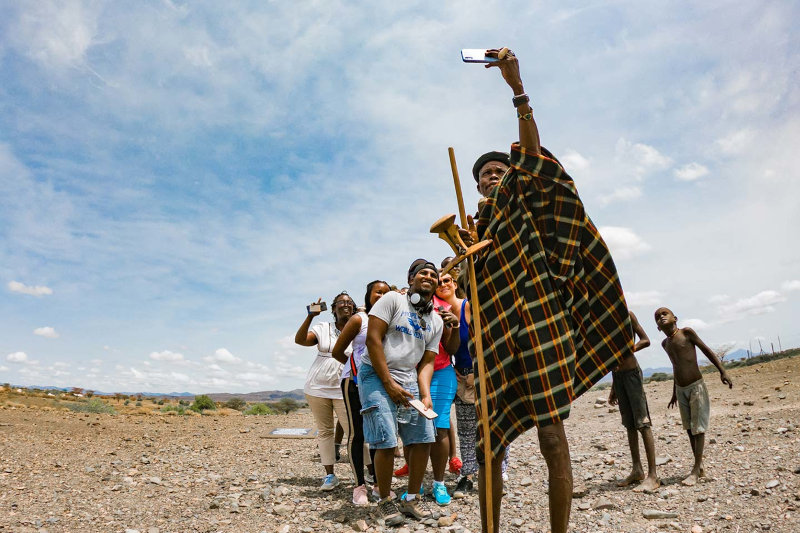 Tourists taking a selfie with a local inhabitant at the archaeological site of Nariokotome in Turkana County, Kenya. Photo by Turnup in Motion

Months into the Covid-19 pandemic in 2020, Kenya’s normally manicured beaches were carpeted three-feet deep in parts with thick layers of seaweed.

The Indian Ocean had seemingly taken advantage of the shuttered hotels and absence of tourists to reclaim the white sands in normally bustling Diani, Watamu, Malindi, and other favoured places along Kenya’s coastline.

The story was similar across much of Africa: pandemic-induced lockdowns and grounded flights devastated the continent’s tourism industry, forcing many operators to the brink of bankruptcy – or to cease operations.

During the height of the pandemic in West Africa, the Azalaï Hotel Group took the difficult decision to close completely. The group has since reopened most of its hotels in the region, but more than half its rooms remain empty.

“I think 2021 is going to be another tough year for the sector,” said Mossadeck Bally, founder and chief executive officer of the hotel group. “The vaccination rollout will give travellers some confidence, but I don’t think people will travel much this year. The recovery will really start in 2022.”

Over the past 20 years, tourism has become vital to African economies. In 2019, the industry accounted for about 7% of Africa’s GDP and contributed $169 billion to its economy – about the size of Côte d’Ivoire’s and Kenya’s combined GDP.

In 2019, domestic tourism accounted for 55% of the continent’s travel and tourism spending.

Africa’s travel and tourism sector employed more than 24 million people in 2019, according to the World Travel and Tourism Council (WTTC).

But Covid-19 has created an unprecedented crisis for the tourism industry in Africa and around the world, crushing the supporting food, service, and manufacturing sectors that depend on tourism for employment and incomes. 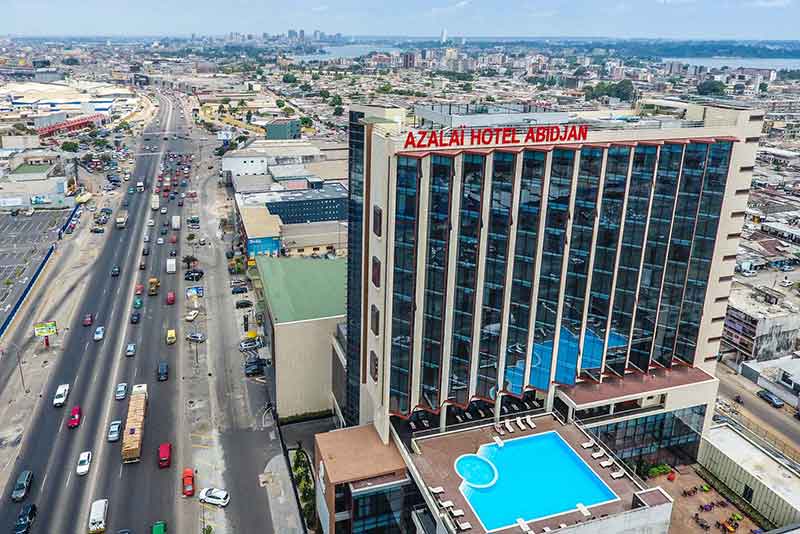 An aerial view of Azalaï hotel in Abidjan, the biggest city and economic hub of Côte d’Ivoire. Photo by Azalai

In July 2020, the African Union estimated that Africa lost nearly $55 billion in travel and tourism revenues and two million jobs in only the first three months of the pandemic. The International Monetary Fund predicted that real GDP among African countries dependent on tourism shrunk by 12% in 2020.

The Azalaï Group, with nine hotels across six West African countries, knows too well the pain the pandemic has inflicted. To survive, it furloughed some staff, reduced salaries, and negotiated a relief-from-debt service with its lenders, including with IFC.

“The impact has been very strong,” said Bally, who refused a salary himself for more than a year. “Our industry was devastated because all of a sudden, we’ve been asked to just stop operating. We are a front-line sector so we are suffering first before it reaches the other industries.”

Aside from its Grand Hotel in Bamako, Mali’s capital, Azalaï’s locations have resumed operations but with fewer staff, pay cuts of up to 40% and a hiring freeze, Bally said. Occupancy rates range from 5% in Guinea Bissau to 40% in Côte d’Ivoire, still well below normal levels.

Africa’s tourism sector has persevered largely without the financial relief provided by governments in wealthier, more developed regions, with the continent’s smaller businesses in the sector most affected.

The crisis has also exposed Africa’s dependence on foreign travelers. This is especially true for countries in Eastern and Southern Africa,…

Josh Frydenberg says more Australians are in jobs now than before the pandemic.

Are Casino Sites Legal to Play In Africa?